SALT LAKE CITY—The Church Historian’s Press today announced the online publication of the first six volumes of the diaries of Latter-day Saint leader and women’s rights activist Emmeline B. Wells, covering 1844 to 1879. For the first time, an annotated transcript of these volumes is available for free to the public at churchhistorianspress.org/emmeline-b-wells.

This publication furthers the aim of the Church Historian’s Press to increase access to materials related to the history of The Church of Jesus Christ of Latter-day Saints. Previous publications include the Joseph Smith Papers, documents chronicling the early history of the Relief Society, discourses by Latter-day Saint women, the Journal of George Q. Cannon, and the Journal of George F. Richards.

The forty-seven volumes of diaries kept by Emmeline B. Wells provide a window into the life of one of the most influential Latter-day Saint women in the mid-nineteenth and early twentieth centuries. In them she is both historymaker, as she meets with presidents and works with national suffrage leaders, and historian, as she records noteworthy events and her daily interactions with and impressions of prominent members of her community. She provides glimpses into her relationships with family, friends, and church leaders. She declares her faith in God even in the face of tragedy. The diaries are a record of her perceptions and philosophies, and they are valuable not only to historians but also to those simply curious about this remarkable woman and the time in which she lived. 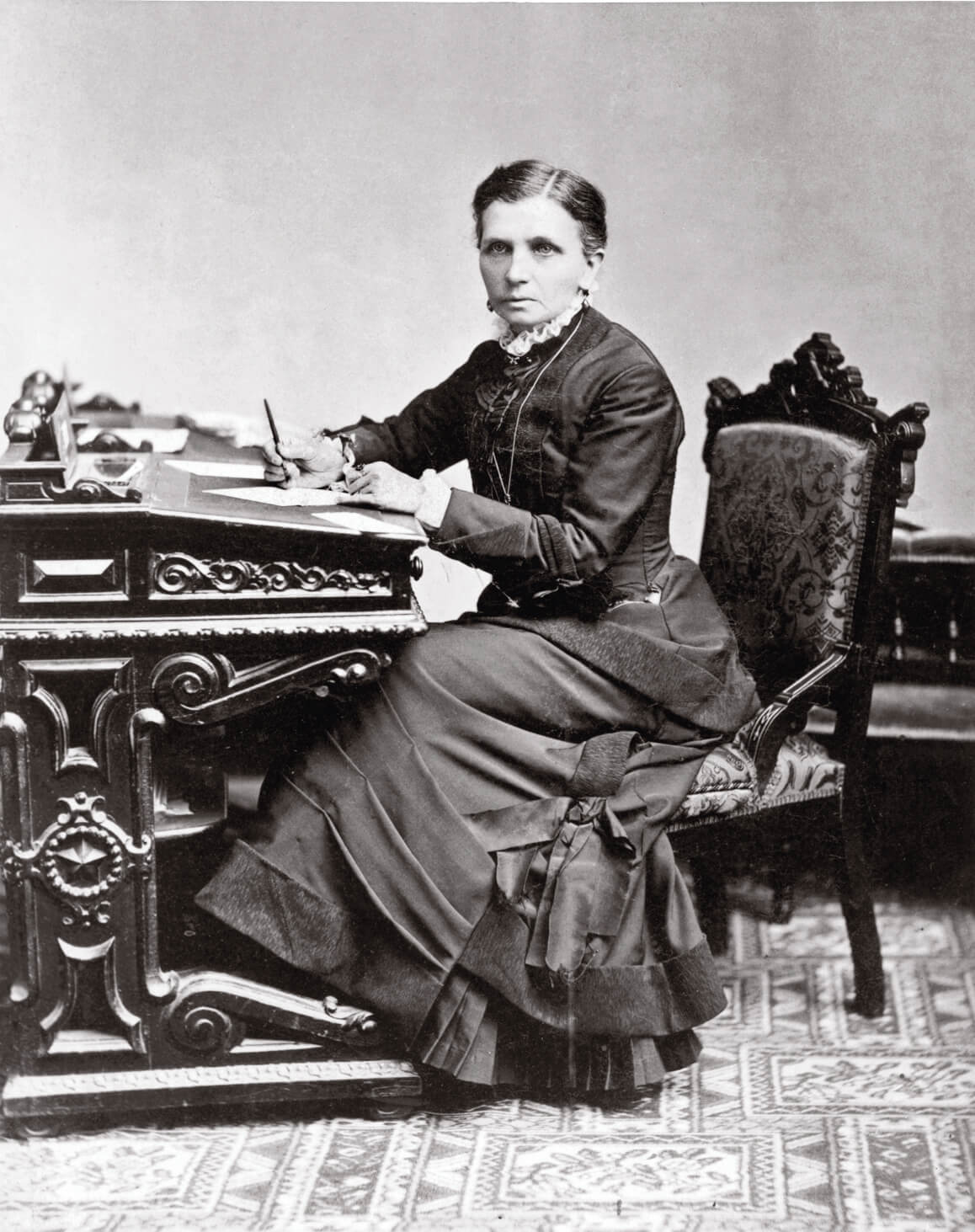 Emmeline B. Wells, 14 January 1879. Emmeline B. Wells traveled to Washington, DC, in January 1879 to attend the annual convention of the National Woman Suffrage Association. In her diary entry of 14 January, Wells noted, “This morn. went to Photo-gallery had pictures taken.” The photograph was taken at the Charles M. Bell studio in Washington. (PH 5107, Church History Library, Salt Lake City.)

Emmeline married three times. She and her first husband, James Harris, had a son who died at a few weeks of age, after which James left in search of work and never returned. She then married Newel K. Whitney as a plural wife, and they had two daughters. After Newel K. Whitney died, Emmeline married Daniel H. Wells as a plural wife. Emmeline and Daniel had three daughters.

Emmeline Wells helped link Latter-day Saint women to national women’s organizations and championed the achievements of the women of Utah to leaders and members of these organizations. She worked as a committee member for the National Woman Suffrage Association (later National American Woman Suffrage Association), the National and International Councils of Women, and the National Woman’s Press Association. In the state, she headed the Utah Territorial Woman Suffrage Association. She served as secretary of the board of the Deseret Hospital Association. She served her political party and ran for state senate, though she was not elected. She organized two local women’s clubs and supported the beginnings of the Daughters of the Revolution and Daughters of the Utah Pioneers. She shared her talent for organization and meeting management with a broad range of church and civic leaders.

Her aptitude for public speaking and keen memory served her well in church service. She assisted general Relief Society president Eliza R. Snow as a secretary and often traveled with her to visit wards and stakes. Under general president Zina D. H. Young, she was named corresponding secretary and wrote countless letters by hand. With Bathsheba W. Smith as general president, Emmeline Wells was called as general Relief Society secretary, a role in which she acted much like an executive director of the board as she set up meetings and arranged travel schedules. In 1910, at the death of Bathsheba Smith, church president Joseph F. Smith and his counselors called Emmeline B. Wells as fifth general Relief Society president. She died on April 25, 1921, at age ninety-three.

This initial publication features annotated transcripts of Emmeline Wells’s first six diaries. All forty-seven of her diaries will eventually be published at churchhistorianspress.org/emmeline-b-wells. The original diaries are owned by the Harold B. Lee Library at Brigham Young University. Officials there have generously permitted the press to publish transcripts of the diaries.